Rice is the seed of the grass species Oryza sativa (Asian rice) or Oryza glaberrima (African rice). As a cereal grain, it is the most widely consumed staple food for a large part of the world's human population, especially in Asia. It is the agricultural commodity with the third-highest worldwide production after sugarcane and maize . Rice is considered to have originated at least 130 million years ago as wild grass. Cultivated rice, as we know it today, was first grown about 10,000 years ago in south-east Asia, probably in India. 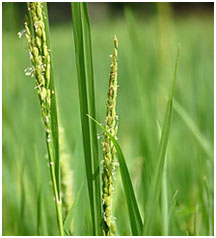 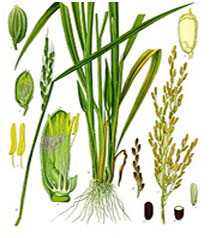 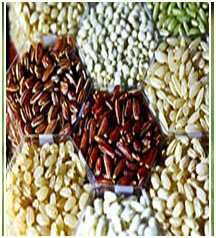 Rice is the most important grain with regard to human nutrition and caloric intake, providing more than one-fifth of the calories consumed worldwide by humans. There are many varieties of rice and culinary preferences tend to vary regionally. Rice can come in many shapes, colors and sizes e.g. Long Grain, medium grain, short grain, black rice, red rice, white rice etc.
Rice cultivation is well-suited to countries and regions with low labor costs and high rainfall, as it is labor-intensive to cultivate and requires ample water. However, rice can be grown practically anywhere, even on a steep hill or mountain area with the use of water-controlling terrace systems.
The traditional method for cultivating rice is flooding the fields while, or after, setting the young seedlings.

1. Origin of Rice: Rice is a grain harvested from the long, grass-like stalk of the Oryza sativa plant (Asian rice) or the Oryza glaberrima (African rice). It is the most widely consumed staple food for a large part of the world’s human population, especially in Asia. Rice is grown on every continent on earth, except Antarctica. It is the third-highest worldwide production, after sugarcane and maize (corn). Rice is the most important human food crop in the world, directly feeding more people than any other crop. In 2012, nearly half of world’s population – more than 3 billion people – relied on rice every day. It is also the staple food across Asia where around half of the world’s poorest people live and is becoming increasingly important in Africa and Latin America. There are more than 40,000 varieties of cultivated rice (the grass species Oryza sativa) said to exist. Rice has fed more people over a longer time than has any other crop. Rice is unique because it can grow in wet environments that other crops cannot survive in. Such wet environments are abundant across Asia.
2. Global Trade Overeiw: Global rice trade is now forecast at a record 47.9 million tons for 2018, but the composition of suppliers is expected to change from last year. For the seventh consecutive year, India is forecast to be the top exporter, reaching a record 13.0 million tons. With record production and ample stocks, there is no threat of the government curtailing non-basmati exports and the forecast is for robust basmati and non-basmati exports, primarily to the Asian, African, and Middle Eastern regions. In contrast, Thai exports are forecast at 10.2 million tons for 2018, down over 12 percent from last year. In 2017, exports were aided by the rapid pace of sales from old-crop rice auctions of government stocks. In the current year, the government is nearing depletion of these stocks, while the private sector is expected to return to its role of maintaining adequate levels of pipeline reserves. Vietnam’s exports are seen slightly higher at 6.7 million tons, reflecting continued strong sales to China and expanded opportunities for supplying affordably priced rice to the region. Other exporters are also expected to edge up, with China in particular accelerating sales to African countries.
3. Indian scenario with market size: Like flowers, rice (Akshat as it is known in Sanskrit) is not only a staple food but is also use for ceremonial and worship purposes as an offering to the Gods and Godesses. Rice is often directly associated with prosperity and fertility, hence there is the custom of throwing rice at newlyweds. In India, rice is always the first food offered to the babies when they start eating solids or to husband by his new bride, to ensure they will have children. Historians believe that while the indica variety of rice was first domesticated in the area covering the foothills of the Eastern Himalayas (i.e. north-eastern India), stretching through Burma, Thailand, Laos, Vietnam and Southern China, the japonica variety was domesticated from wild rice in southern China which was introduced to India before the time of the Greeks. Rice is first mentioned in the Yajur Veda (c. 1500-800 BC) and then is frequently referred to in Sanskrit texts.
The earliest remains of cultivated rice in the sub-continent have been found in the north and west and date from around 2000 BC.
4. Rice contributes more than 40 per cent of the country’s total food grain production. According to the data released by the government of India, the total rice production in India stands at 104.41 million for the year 2015-2016. The major producing states were:

Thus as far as production is concerned, India ranks second after China.

Though there are a large number of rice varieties grown across countries, in India apart from non basmati rice, speciality Basmati rice is also cultivated which is a unique fragrance. This rice is different from any other fragrant rice grown in the word and there is an adage “All Basmatis are scented but not all scented rice is Basmati”. Basmati rice is a heritage of Indian subcontinent and is cultivated under the foothills of Himalayas only in defined region encompassing the states of pre-partition Punjab (part of Punjab now in Pakistan) , Haryana, Uttarakhand, Western UP, Himachal Pradesh, Delhi and three districts of Jammu Division in Jammu &amp; Kashmir. Because of its nexus with the climatic conditions and environment in the growing geography, it has been designated as a Geographical Indication (GI) also. Known for its slender, silky grain, typical fragrance upon cooking and unique characteristics, Basmati rice is also termed as Kind of Rice.
Non Basmati rice is cultivated in almost every state of India and there are a vast number of varieties existent.

Source: DGCIS
Indian rice is exported to more than 120 destinations across continents. During 2017-18 a total of 12.7 m tonnes of overall rice was exported from the country and this year till December the export quantity has touched 7.9 m tonnes . It is projected that the export till FY end will be slightly lower than last year’s figure . The major reason for this is  (a) sanitary issues faced from various countries in respect of Basmati rice (b) duty hike in Bangladesh leading to drop in import by that country (c) 13% hike in MSP of non basmati rice.
India’s position vis=a=vis competitors: Indias has remained top rice exporter in the world for last five year . As per information available currently the top 10 rice  exporting countries are:

6. Challenges (Production, Infrastructure, Logistics, Quality, Marketing): Export of rice in general and Basmati rice in particular has several caveats attached to its such as adherence with varying and stringent norms of maximum residue levels (MRLs) of various plant protection products (PPPs). In order to be able to follow this extreme care is taken to use various PPPs very judiciously for which farmers are being regularly trained and counseled by exporters. Exporters have invested large sums of money in developing state-of-the-art processing facilities over the years.
The Logistics costs in India are very high and have risen by 243% during the decade spanning 2005-2015. Chine is the only other country with higher incrase of 282% during the same period. Other countries like Pakistan, UAE, Egypt, Thailand etc have much lower cost of logistics and this leads to incompetitiveness for Indian rice. Rationalization of logistics costs is required.
As for marketing, concerted promotion programs on regular basis in hitherto untapped countries needs to be carried out.
7. Opportunities: India is looked after by the global market as the warehouse for food exports. Rice is a prominent commodity amongst the agricultural export basket of the country. The export of rice (both basmati and non basmati) accounts for a foreign exchange earning of around $ 8000 million (around Rs 50,000 Cr). But in order to sustain regular growth of export of rice from the country, some steps are necessarily called for such as :
a) Persistent training of farmers in every facet of agronomic practices suited to meet international sanitary and phytosanitary requirements.
b) Government support to the rice industry in terms of equitable distribution of incentives.
c) Promotion of contract farming.
8. Strategic actions:
a) Early warning system for sanitary matters across the globe for preparedness to handle such situations.
b) Extensive farmer training in Good Agricultural Practices (GAP) and modern agronomic practices and judicious use of permitted PPPs.
c) Institutionalized sale of PPS.
d) Proper label claim/prescription for use/dosage of PPS in relation to Acreage.
e) Market diversification.
f) Focussed market promotions.